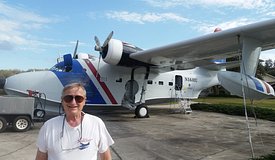 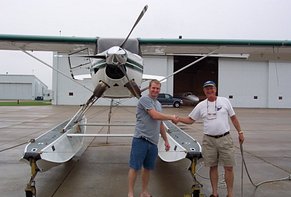 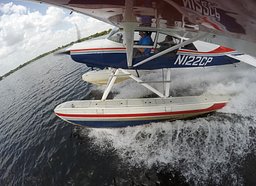 Dave started flying in seaplanes and hasn't really had a chance to fly anything else.  After high school, Dave started a electronics internship, but ended up going to work with his brother-in-law for a commercial diving operation.  This included just about any work in or around the water including underwater welding, pipeline inspection and repair, ship salvage, etc.  Dave attended Divers Institute of Technology in Seattle, WA and worked as a commercial diver for a few years and eventually returned to school.  Rich encouraged Dave to attend Embry-Riddle Aeronautical University (ERAU).  Dave first learned and became certified to fix airplanes (A&P mechanic).  Then, afterwards decided to continue with a Bachelors degree with ERAU as well.  Dave made highest honors with a 4.0 GPA and was offered and took a job as a aircraft mechanic for ERAU until he was hired by the FAA to work as an air traffic controller.  Dave trained in Oklahoma and was then given a job as a FAA center controller at Miami Center.  After a few years with the FAA, Dave decided he didn't enjoy the job and switched over to Flight Service.  He worked for Lockheed Martin for about 7 years and then eventually decided to help out his dad in the seaplane business.  Dave has been a pilot since 1999 (even though he would fly with dad prior).  Rich was a pilot for over 50 years and was awarded the famous FAA Wright Brothers Award, which is for pilots who safely fly for more than 50 years.  The family has always been around water and the seaplane has only helped the family explore the world from a perspective that most don't get to have (low and slow).

Eventually, the 4 seaplane bases were more work for the father of three than he desired, leading him to reduce to one facility.  Rich bought and sold several seaplanes over the years and kept one at his home.  He trained both his sons, Michael and David, in M7 Maule seaplanes.  They completed their private training on floats first (very unusual) and then had to get the add on rating of landplane next.  Rich also flew in Alaska as a bush pilot each fall from 2000 thru 2004.  Due to his traveling, he decided to keep it simple by only keeping one aircraft at home.  Conducting ground training out of the home office was simpler and easier.  Rich and Dave ran the company together up until and Rich flew up until 2020.  He passed in March and Dave continues to operate Florida Seaplanes.

Florida Seaplanes specializes in training pilots to safely fly single-engine seaplanes, with an emphases of having fun. Currently Florida Seaplanes owns two Maule Super Rockets. They both are on straight Aqua 2400's.  We strive to have the finest equipment in the industry for teaching and like to have fun.  We train students as efficiently as possible in machines we know very well.  Included in training is various takeoffs, landings, water taxi, etc.  We do river landings too, which most places don't. Florida Seaplanes  has gained valuable experience over the years and tries to pass on secrets of how to operate seaplanes successfully to its worldwide clientele.  Safety is priority #1 followed closely by FUN!

In 1992 Rich was able to purchase a 2nd Maule Super Rocket.  This Maule, like most of the 30 plus Maule Seaplanes that we have owned over the years, had the powerful Lycoming 540 engine and was equipped with rugged Aqua 2400 floats. Florida Seaplanes opened its 2nd commercial location at the Dead River ( Palm Gardens Marina NW of Tavares). In 1993 as business was growing Rich decided to go to Belford Maule to order a brand new Maule and then the 3rd site was opened in 1993 at Lake Topopekaligia waterfront park of Kissimmee.  Early in 1994 a fourth commercial seaplane base was additionally opened at Lake Bryan near Lake Buena Vista Florida.

Florida Seaplanes was started by Richard and Susan Hensch in 1992.  Prior to seaplane flying, Rich flew Navy jets (Top Gun graduate!)  Rich was commissioned in 1969 after college and Naval officer school and went to Pensacola, FL for initial flight training.  He scored top of his Navy class with a 3.4.  He trainined in T28 and the T34 aircraft.  Most of his Navy flight time was in the A7 Corsair and A4 Skyhawk.  He logged 480 aircraft carrier landing, including 110 at night. He says you can keep all of the night carrier landings as they were downright scary.  After 22 years, he retired and was hired by Pan American World Airlines.  He flew B747 aircraft for Pan Am until they went belly up.  Rich was taught how to fly seaplanes by Ace Claxton, in his Cessna 172 (145 Continental) on Edo 2000 floats. He bought his first seaplane, a Cessna 185 (turbo charged) on Edo 2790 floats.  He bought his first M7 Maule Super Rocket Seaplane (on Aqua 2400 floats) in early 1992 and decided to set up Florida Seaplanes Inc at Monroe Harbor in Sanford, Florida.  While Rich handled the flying, Susan was a full time public school teacher, kindergarten, and also helped raise their 3 kids, Sarah, Michael, and David.